Politicians are increasingly using nonprofits capable of accepting unlimited dark money funds to advance their agendas and oligarchs use those non-profits to bribe those politicians.

Since Watergate, it’s been illegal for anyone to secretly donate millions to a federal candidate’s election campaign. Congress decided at the time that capping contributions was a price worth paying to deter corruption. For the same reason, campaign finance law requires candidates to publicly disclose donations above a certain amount. Sunlight, as the Supreme Court likes to say, is the best disinfectant.

But such rules — designed to prevent would-be officeholders from being “bought” by wealthy donors — don’t apply to a burgeoning new mode of self-promotion that politicians are embracing once they actually take office.

Like so-called “buddy PACs” – unlimited spending groups that support a single candidate during campaign season – the new must-have accessory for successful politicians is the officeholder-controlled nonprofit. These entities, launched after the campaigning is over, can raise unlimited amounts in secret donations to spend on promoting officeholders and their agendas. And they are gaining popularity among elected officials at every level of government.

The time has come to enact common-sense regulations to stop these nonprofits from corrupting our politics.

Among the most prominent examples: America First Policies, a 501(c)(4) social welfare nonprofit that President Trump’s top advisors founded a week after his inauguration. Earlier this year, CNBC reported the group has conducted polling worth as much as seven figures — work that typically fuels political ad campaigns. Among other promotions of Trump administration positions, the nonprofit produced a TV ad last fall that featured flattering footage of the president and called on viewers to “stand with President Trump to cut taxes, now.” The donors to America First Policies remain secret.

In a recent report, we at the Brennan Center for Justice found that at least two presidents, seven governors, and several prominent mayors – from both major parties – have established nonprofits that allow them to raise unlimited, anonymous funds for political spending after election day.

Since 2010, these elected officials — including Republicans like embattled Missouri Governor Eric Greitens and progressives like campaign finance warrior Bernie Sanders — have altogether raised as much as $150 million for nonprofits that they are able to control and use to promote their respective agendas.

Allowing elected officials to take unlimited cash from usually secret donors through these nonprofits opens the door to conflicted loyalties and corruption. Occasional exposés reveal some of these donors have specific business interests before the elected officials whose nonprofits they support – and likely see their donation as a means to win government decisions that will benefit them.

In New York State, for example, gambling companies donated $2 million to a nonprofit affiliated with Governor Andrew Cuomo just before the he declared his support for increasing gambling in his 2012 State of the State address. And in Los Angeles, a pipe manufacturing executive made it clear that his million-dollar pledge to the mayor’s nonprofit was meant to gain influence in a city that forbids campaign contributions by companies seeking government business. He told the Los Angeles Times, “We want to influence the government leaders to make the right decisions so that we can be more competitive.”

Some of these nonprofits have taken steps at self-regulation. President Obama’s Organizing for Action wrote the playbook on turning these types of nonprofits into publicity juggernauts. In the spirit of being “open and transparent,” OFA decided early on to voluntarily disclose its donors. But hoping that officeholder-controlled nonprofits will voluntarily disclose funders is hardly a plan to ensure ethical governance.

Americans deserve to have confidence that decisions about who builds bridges or treats drinking water are based on the most qualified, competitive bid – not who gives the most to an elected official’s nonprofit. For this reason, we recommend a straightforward set of laws to bring transparency to these nonprofits and limit the influence of those with specific business interests before government, and we’re urging legislators across the country to adopt it.

First, we should identify those nonprofits that pose a major risk of corruption – determining whether an elected official or close associates control the group and, if so, whether the group spends substantial amounts on promoting the official. Then, for the small set of entities this test would identify, we propose two key safeguards that are well-established components of anti-corruption law. One is public disclosure of who is giving money, and how much, to an officeholder-controlled nonprofit. The second is contribution limits for donors who have concrete business interests that the politician has the power to affect.

Some jurisdictions have already started following this model. In New York City, similar legislation kicked in this year following a federal investigation into Mayor Bill de Blasio’s nonprofit and allegations of ethical transgressions. And in early 2017, the Missouri legislature considered a measure to require certain nonprofit groups to report donations, though the effort fell short.

To be sure, nonprofits associated with elected officials may do work that serves the public. They may use the officeholder’s high profile to attract private funding for education, economic development, antipoverty work, and more. The beauty of a legal solution that focuses on control by the elected official and spending to promote that official is that these public benefits can go on, uninterrupted.

But with officeholders’ increasing reliance on private donors even outside of campaign season, requiring transparency and limiting donations by those seeking government business are crucial starting points for protecting government integrity. To ignore this growing problem of money in our politics, where a handful of ultrarich donors already wield grossly outsized influence, would ignore an unacceptable threat to representative democracy.

A few politicians go after political ‘dark money’ with anti-corruption measure but is it just an act?

HR1 is designed to combat the secret political funding illustrated in the John Doe Files, leaked to the Guardian in 2016

Ed Pilkington in New York and Sabrina Siddiqui in Washington

The influence of “dark money” in American politics that allows billionaires to fund political campaigns through third-party groups without disclosing their involvement was put under the spotlight at a congressional hearing on Thursday, as Democrats use their newfound majority to crank up a sweeping new anti-corruption measure.

In the first hearing on the bill, known as HR1, the House administration committee examined how undisclosed donations from some of the country’s richest individuals is distorting they way politicians are elected.

“The mechanics of our democracy - access to voting, running for office, holding government accountable - have undergone radical changes in recent years,” Congresswoman Zoe Lofgren, the committee’s chairwoman, said while commencing the hearing.

She added: “These changes have tended to restrict the rights of eligible voters. It has made the voices of the wealthy and powerful so loud that they can drown out the voices of ordinary people.”

The committee heard from a range of election experts, as well as from civil rights activists, who illuminated the impact of such “dark money” on the lives of ordinary people.

A key example of the corrosive influence of secret political funding presented before the committee was the John Doe Files, the vast tranche of documents leaked to the Guardian in 2016 and posted in their entirety on the Guardian website. The 1,500 pages of material exposed how big corporations and some of the wealthiest rightwing donors in the US used their fortunes to prop up prominent politicians, in some cases going on to extract political favors in return. 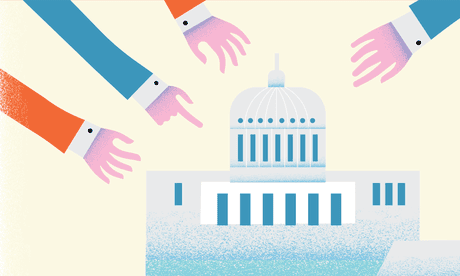 Peter Earle, one of the panelists, was poised to appear before the committee later in the hearing to detail the revelations of the John Doe Files. A civil rights trial lawyer in Milwaukee, Earle has been suing the historic manufacturers of lead paint in a long-standing case designed to secure compensation for poisoned children as well as to generate funds needed to remove still existing toxic paint from hundreds of thousands of homes across the US.

“It is indeed a sad day for our democracy when a rich and powerful corporate CEO can deprive innocent victims of lead poisoning their day in court just because he could afford to secretly donate huge amounts of money to greedy and ruthless politicians,” Earle will say, according to a copy of his written testimony.

“The only reason that this story is publicly known is because years after the secret six- figure donation and subsequent sweetheart legislation, a trove of previously secret documents was leaked to the Guardian newspaper by a valiant whistleblower.”

The Guardian’s documents revealed that the late owner of one of the largest historic makers of lead paint, NL Industries, had donated $750,000 to a third-party group in Wisconsin that was heavily involved in helping the state’s then governor Scott Walker fight a recall election. As the money was passed through a group, the identity of the donor, NL Industries’ owner Harold Simmons, remained secret until the Guardian exposed it.

That meant that nobody was able to join the dots when, soon after Walker won the election, the Republican-controlled legislature in Wisconsin changed state law. Under the rule change, it became much more difficult for victims of lead paint poisoning, most of them children, to sue NL Industries and other former lead paint manufacturers for the damage inflicted on them.

Concern about the pervasive influence of undisclosed political donations by corporations and the super-rich has become a red hot issue, particularly among the new intake of young Democratic Congress members swept in by November’s mid-term elections. The “corruption game” played by Alexandria Ocasio-Cortez before the House Oversight committee in which she denounced campaign finance controls – or the lack of them – this week became the most viewed video of a politician’s speech ever posted on Twitter.

In it she said: “We have a system that is fundamentally broken.”

The Democratic party has chosen to mark its renewed dominance in the House of Representatives following the November elections by putting reform of America’s stricken democracy at the top of its agenda. HR1, known as the For The People Act, includes strong provisions designed to combat corruption by forcing all organizations involved in political activity, including so-called “social welfare” groups, to disclose large donors.

The bill is likely to be put to a House vote next month and is assured of passage through overwhelming Democratic support. It is almost certain to flounder, however, in the Republican-controlled Senate, given the virulent opposition from the party.

Mary Bottari, a researcher with the watchdog on money and politics, the Center for Media and Democracy, said Wisconsin should be seen as a cautionary tale for the nation. “Billionaires give huge amounts to aid politicians but because they gave it to a third-party group the public would never know.”

Many senior figures in the current Republican party and Trump administration appear in the John Doe Files. Trump himself has a walk-on part: the leaked documents disclosed that he made a donation of $15,000 following a personal visit from Scott Walker to Trump Tower in New York.

Another who makes an appearance in the documents is Nick Ayers, who has just stepped down as chief of staff to the vice president, Mike Pence. He has reportedly left the White House for a senior role in a super Pac that will be channeling money from big donors to Trump’s 2020 re-election campaign.

Also prominent at Thursday’s hearing was the issue of voting rights and efforts to restrict access to the polls that are predominantly aimed at people of color and students.

“The promise of this country is that every person has a voice and every person out to be counted,” Chiraag Bains, the director of legal strategies at the public policy organization Demos, told the panel. “Our history has been one of struggle to make that promise a reality.”