By Thomas Claburn in San Francisco 23 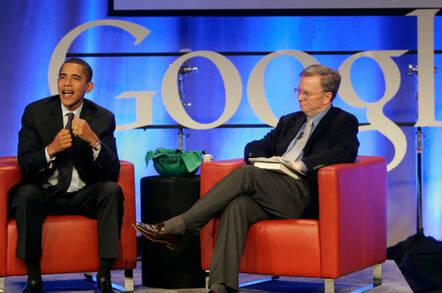 Grilled ... US President Barack Obama on stage with Eric Schmidt

Schmidt – who served as Google's adult supervision and CEO from 2001 through 2011 before stepping back to enjoy time as exec chairman of the board and billionaire – will remain a board member.

After officially stepping down from the top role in January, he will also become a technical advisor, fixing the Wi-Fi and whatnot.

CEO and company co-founder Larry Page, who took the reins from Schmidt as part of a campaign to put "more wood behind fewer arrows", celebrated his former nanny's contributions to the sprawling global ad biz.

Eric Schmidt is a goldmine for headline writers. Other titles considered for this story:

"Since 2001, Eric has provided us with business and engineering expertise and a clear vision about the future of technology,” Page said in a statement. “Continuing his 17 years of service to the company, he’ll now be helping us as a technical advisor on science and technology issues."

Schmidt's canned response to the valedictory praise offered little in the way of explanation beyond suggesting everyone felt it was time for a change.

"Larry, Sergey, Sundar and I all believe that the time is right in Alphabet’s evolution for this transition," said Schmidt in a statement, referring to Google cofounder Sergey Brin and CEO Sundar Pichai. "The Alphabet structure is working well, and Google and the Other Bets are thriving."

While Google and the Other Bets may sound like a hastily named band, "Other Bets" here refers to the money-losing moonshots that Google wisely put at a distance through the formation of Alphabet.

THE SCHMIDT HITS THE BAN: Keep your gloves off AI, military top brass

Schmidt said he's been spending a lot of time on science and technology issues, as well as philanthropy, and he expects to do more of that. And he echoed that in a tweetabout his departure.

Before bringing discipline of sort to Google, Schmidt served at Sun, Novell, Bell Labs, and Xerox PARC, among other organizations.

Schmidt also had a seat on Apple's board of directors from August 2006 until three years later when Google's ambitions for Android became problematic for Apple.

He's also remembered for his cameo in the 2014 film Dumb and Dumber To, at least among those who have seen the deleted scenes on the Blu-Ray release – he didn't make the theatrical cut. ®

Thanks to readers on Twitter, particularly Steve Groark, for the headline ideas.