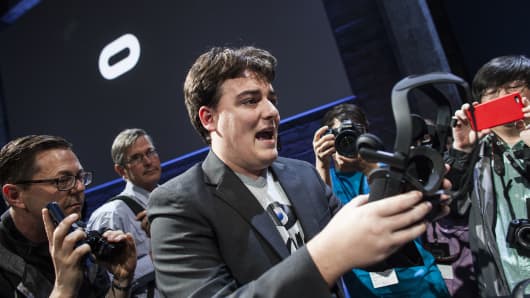 Silicon Valley is battling a new report of anti-conservative culture, fanning the flames of an already-intensifying debate.

A weekend report by The Wall Street Journal on the 2017 firing of Facebook executive Palmer Luckey claims the Oculus co-founder was forced out for factors relating to his political leanings and online support for Donald Trump during the 2016 presidential election.

Facebook and its executives have repeatedly said Luckey's firing was not the result of his political views. CEO Mark Zuckerberg testified as much before Congress in April, and vice president of AR/VR at Facebook, Andrew Bosworth, said on Twitter late Sunday, "Any claims that his departure was do to his conservative beliefs are false."

A Facebook spokesperson told CNBC on Monday, "We can say unequivocally that Palmer's departure was not due to his political views."

The conflicting reports could add to existing concerns of anti-conservative bias among tech companies. In recent months, Facebook, Google and Twitter have all faced intensifying claims of online censorship and an environment that's not welcoming to right-leaning employees.

The Journal report claims Luckey's activity on a polarizing, and often extreme, right-leaning Reddit channel caused an uproar among Facebook employees. It also says the company pressured Luckey to write in an internal email that he supported libertarian presidential candidate Gary Johnson, instead of Trump.

"We always made it clear that any mention of politics was up to Palmer and we did not pressure him to say something that wasn't factual or true," a Facebook spokesperson told CNBC.

Facebook executives have said they're limited in what they can say about Luckey's departure, since it deals with confidential personnel matters. Luckey, who received a $100 million payout, according to the Journal, told CNBC last month it wasn't his choice to leave Facebook.

Every so often, Silicon Valley's virtue-signaling, shadowbanning, anti-conservative media titans appear in Congress or devise a quick PR campaign to show to the world just how truly impartial they are with zero liberal bias. And every single time it backfires as their true ideological face quickly emerges from behind a fake, hypocritical mask.

Take the case of former Facebook executive, Oculus co-founder and virtual-reality wunderkind Palmer Luckey, who was a rising star of Silicon Valley when, at the height of the 2016 presidential contest, he donated a modest $10,000 to an anti-Hillary Clinton group. His donation sparked a backlash from his colleagues, which then led to him being put on leave, and six months later he was fired.

What is odd about Luckey's termination, is that when testifying before Congress about data privacy earlier this year, Mark Zuckerberg denied, or rather lied that the departure had anything to do with politics. In fact, neither Facebook nor Mr. Luckey ever said why he left the social-media giant.

Until now: according to a report from the WSJ, Luckey told people the reason for his termination from that bastion of apolitical impartiality Facebook, was his support for Donald Trump and the furor that his political beliefs sparked within his employer, and Silicon Valley, some of those people say.

It's not just his opinion either: internal Facebook emails suggest the matter was discussed at the highest levels of the company. In the fall of 2016, as unhappiness over the paltry donation simmered, executives at Facebook - which according to Open Secrets has spent over $60 million on lobbying in the past decade - including Zuckerberg pressured Mr. Luckey to publicly voice support for libertarian candidate Gary Johnson, despite Mr. Luckey’s yearslong support of Trump.

At that point Luckey, 26, allegedly hired an employment lawyer who argued to Facebook that it had violated California law in pressuring the executive to voice support for Johnson and for punishing an employee for political activity.

Not long after, Luckey and his lawyer negotiated a payout of at least $100 million, representing an acceleration of stock awards and bonuses he would have received through July 2019, plus cash, according to the people familiar with the matter. The stock awards and bonuses were a result of selling his virtual-reality company, Oculus VR, to Facebook in 2014 for more than $2 billion, a deal that netted him a total of about $600 million.

Meanwhile, in keeping with its fake facade of objectivity and impartiality, a Facebook spokeswoman told the WSJ that "we can say unequivocally that Palmer’s departure was not due to his political views. We’re grateful for Palmer’s contributions to Oculus, and we’re glad he continues to actively support the VR industry."

Of course, if he were to say anything else, it would be in violation of the Luckey's separation agreement. Same goes for the Oculus founder, who described the episode as being in the past.

"I believe the team that remains at Oculus is still the best in the VR industry, and I am rooting for them to succeed."

It's doubtful that the inverse is also true: Luckey started Oculus in 2012, while still a teenager, with a $2.4 million crowdfunding campaign. He dropped out of the journalism program at California State University, Long Beach, to work on the company, along with co-founder Brendan Iribe. When they sold to Facebook, Luckey became the face of the virtual-reality industry, appearing on a Time magazine cover saying the technology was “about to change the world.”

But the real reason why the young entrepreneur - a Long Beach native who was home-schooled by his mother - never fit in was because he was often out of step with the largely liberal culture of Facebook. A fan of big cars and military gear, he drove a giant tan Humvee with machine-gun mounts and orange toy guns. According to WSJ sources, he once was forced to move it from the Facebook parking lot after someone called the police in to investigate.

However, what likely turned his co-workers against him, is that Luckey has been a longtime supporter of Donald Trump and wrote a letter to the then-reality-television star in 2011 urging him to run for president. Mr. Luckey has told friends that reading Mr. Trump’s book “The Art of the Deal” at age 13 sparked his entrepreneurial imagination.

And while even that may have been forgiven; the real dealbreaker was when Luckey slammed the patron saint of virtue signalers everywhere: Luckey’s fallout with Facebook began in September 2016, when the Daily Beast revealed his $10,000 donation to NimbleAmerica, a pro-Trump group that paid for advertising mocking Hillary Clinton ahead of the 2016 election. At least one billboard paid for by the group featured a picture of Mrs. Clinton and the phrase “Too Big to Jail.”

In one post on a Reddit chain dedicated to supporting Mr. Trump, the author, called “NimbleRichMan,” said he was donating to the group so it could spread unflattering memes about Mrs. Clinton. In the same post, the author professed to support Mr. Trump’s campaign, saying:

“Hillary Clinton is corrupt, a warmonger, a freedom-stripper. Not the good kind you see dancing in bikinis on Independence day, the bad kind that strips freedom from citizens and grants it to donors.”

The Daily Beast wrote that Mr. Luckey had said he used the pseudonym NimbleRichMan, and it was all downhill from there.

Luckey’s donation and the perception that he might be associated with a group that at times traded in misogynistic and white-supremacist messages, as some news stories reported, ignited a firestorm. Facebook employees expressed anger about Luckey on internal message boards and at a weekly town hall meeting in late September 2016, questioning why he was still employed, according to people familiar with the complaints. Because Silicon Valley's liberals are all about tolerance, as long as the opinion they have to tolerate is identical to their own.

Johnstone: The Best Way To Honor War Veterans Is To Stop…

The US will be celebrating Veterans Day, and many a striped flag shall be waved. The social currency of esteem will be…

In an apology posted on Facebook that month, Mr. Luckey denied writing the NimbleRichMan posts and said he “contributed $10,000 to NimbleAmerica because I thought the organization had fresh ideas on how to communicate with young voters through the use of several billboards.”

The post said Mr. Luckey is a libertarian and planned to vote for Mr. Johnson in the election.

Maybe not: “I need to tell you that Mark [Zuckerberg] himself drafted this and details are critical,” Facebook Deputy General Counsel Paul Grewal wrote to a lawyer for Mr. Luckey in a September 2016 email, attaching an early draft of the statement, according to the emails reviewed by the Journal. The draft said Mr. Luckey wouldn’t be supporting Mr. Trump in the election.

Soon after the apology was posted, a writer at the Daily Beast posted on Twitter emails he had received from Mr. Luckey in which he said he made at least one post attributed to NimbleRichMan—a contradiction of his public statement. Mr. Luckey has since told people he wasn’t the author, but took responsibility because the post reflected his views.

Facebook executives were furious about the conflicting statements, with some believing that Luckey had lied to them, according to people familiar with the matter.

At this point the company had every intention of firing Luckey, but it lacked a valid reason: The company launched a human-resources investigation, which in 2016 found that Luckey hadn’t violated internal policies, say people familiar with the investigation. His performance reviews were consistently positive, including his last in June 2016.

That was not enough to allow the young conservative to keep his job however, and amid the uproar, Facebook placed Luckey on paid leave. Then, just to rub salt in his coworker's liberal wounds, after Trump won the election in November, Luckey donated $100,000 to his inaugural committee. By December 2016, he had returned to work to prepare for and testify at a trial, although he was only on campus for a couple of days.

Meanwhile, Facebook finally got the break it needed in letting Luckey go: a videogame publisher, ZeniMax Media Inc., had sued Facebook shortly after it purchased Oculus, contending that a ZeniMax employee took proprietary code when he joined Oculus. After a trial, a judge ordered Facebook to pay $250 million, plus interest. Facebook has appealed.

After the verdict, Mr. Luckey got a call from a Facebook executive asking him to resign, according to people familiar with the call. He declined, seeking instead to get reinstated. Facebook said no.

After his departure, Luckey - financially set for life - became even more political. One month after he left Facebook, he hosted a fundraiser for Republican Sen. Ted Cruz of Texas. He has since founded Anduril, an Orange County-based tech company focused on using artificial intelligence to protect troops, performing search-and-rescue missions and bringing “Silicon Valley thinking and funding to defense."

Recently, Mr. Luckey came as close as he has ever come to publicly divulging the circumstances of his Facebook departure. At Vanity Fair’s New Establishment Summit in Los Angeles last month, he told CNBC that"“it wasn’t my choice to leave."

Luckey’s termination ouster from Facebook was a harbinger of battles that have broken out over the past year over the overwhelmingly liberal culture of Silicon Valley, which has given the tech industry public-relations headaches for filtering out and banning conservatives, and brought unwanted attention from Washington.

Executives from Facebook, Twitter and Google have had to answer questions from lawmakers about potential bias in their treatment of conservative viewpoints. Tech executives concede that Silicon Valley is predominantly liberal—Zuckerberg said in Senate testimony that it is “an extremely left-leaning place”—yet they have steadfastly maintained that politics doesn't, which we now know once again is clearly a lie; then again one look at the charts below would have led to the same conclusion.