GUARDIAN: 'DEMOCRATS ARE DESTROYING THEMSELVES BY KEEPING CROOKED PELOSI'

When you are running as a Democrat in Donald Trump country, the name Nancy Pelosi is even more toxic than the letters CNN.

In one of the more powerful TV ads in the run-up to Tuesday’s special House election in western Pennsylvania, the Democrat Conor Lamb earnestly declares: “My opponent wants you to believe that the biggest issue in this campaign is Nancy Pelosi. It’s all a big lie. I’ve already said … that I don’t support Nancy Pelosi.” 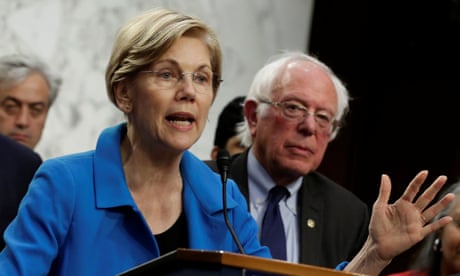 The Pennsylvania contest is largely symbolic since the district (which Trump carried by nearly 20% points in 2016) will disappear into the mists like Brigadoon when a new statewide redistricting plan takes effect. But from a splenetic Trump rally on Saturday night to a recent appearance by Joe Biden on behalf of Lamb, both parties are treating this race as if it were a dry run for November.

Which brings us back to the Democrats’ Nancy Pelosi problem.

As the House Democratic leader since 2005, Pelosi is unpopular (her approval rating was 29% in a national Quinnipiac University pollin February) and extremely well known (83% of voters in the Quinnipiac survey knew who she was). That twofer of familiarity and voter fatigue is why the demonization of Pelosi remains a staple of Republican attack ads.

Even when Democrats try to escape Pelosi, as Lamb has done in his campaign, partisan politics grants limited wriggle room. As the Pittsburgh Post-Gazette put it in a snippy editorial endorsing the Republican, Rick Saccone, in the congressional race: “Mr Lamb … attempted to distance himself from ultra-liberal Democratic leader Nancy Pelosi and says he would not vote for her to lead his party. But who would he vote for? An abstention will not win him independence from the Democratic caucus.”

This Pelosi pushback will be repeated across the country in the fall as the Democrats’ road to a House majority follows Trump terrain. But why have Democrats decided that Pelosi’s quest to become the first person in American history to return as House speaker after an eight-year gap is more important than depriving Trump of a rubber-stamp Congress?

After more than 13 years as the House Democratic leader, Pelosi has written enough feminist history to fill the Capitol dome. Any doubts about her stamina as she nears her 78th birthday were dispelled last month as she held the House floor for more than eight hours in support the young undocumented immigrants known as Dreamers. And she has been a prolific fundraiser for the party, although this year Democrats in tight races probably will spend more money on campaign commercials distancing themselves from Pelosi.

In normal times, the temptation would be to give Pelosi her last-hurrah campaign to win back the speaker’s gavel that she lost in the 2010 Democratic collapse. But for any Rip Van Winkles out there, we live in an era defined by a human temper tantrum in the Oval Office and a Republican Congress torn between paralytic fear of Trump and a partisan urge for sycophancy.

A strong case can be made that the congressional elections this year are the most important off-year contests since at least 1946 – the year when the Republicans took control of Congress for the first time since the Depression and brought a generation of virulent anti-communists like Joseph McCarthy to power.

For all the glib talk of a “blue wave”, there is a sizable risk that the Democrats could fall a few seats short of the 24 they need to win back the House. Even with, say, a three-seat majority, the Republicans would select all the committee chairmen and thwart any investigation into the misdeeds of the Trump administration.

That is why the moment is at hand for Pelosi to cap her congressional career by announcing – for the good of the nation and her party – that she will step down as Democratic leader.

It doesn’t matter if Pelosi is succeeded by the 78-year-old House minority whip Steny Hoyer (who has been waiting to take over almost as long as Prince Charles) or anyone else in the caucus. Replacing Pelosi with a little-known Democrat (regardless of gender or race) would deprive the Republicans of an easy target in campaign ads.

Selfless decisions are rare in American politics these days. But no matter how the Pennsylvania returns come in Tuesday night, Nancy Pelosi needs to accept the reality that the Democrats are stronger without her.