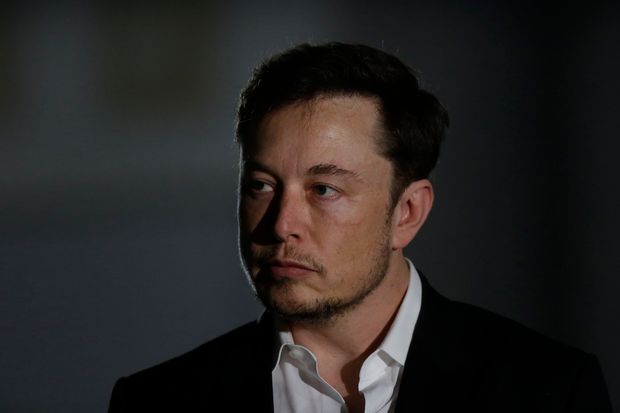 U.S. securities regulators on Thursday sought to force Tesla Inc. TSLA -0.67% Chief Executive Elon Musk out of the company he helped get off the ground about 15 years ago, alleging he misled shareholders when he tweeted he had funding for what would have been the largest-ever corporate buyout.

The complaint filed by the Securities and Exchange Commission came after a last-minute decision by Mr. Musk and his lawyers to fight the case rather than settle the charges.

The filing by the SEC in federal court in Manhattan threatens to deal a severe blow to the Palo Alto, Calif., electric car maker. Its brand and Mr. Musk are closely intertwined, and analysts have said the company’s roughly $50 billion market value is driven by Wall Street’s appreciation for Mr. Musk’s vision and skill as an innovator. 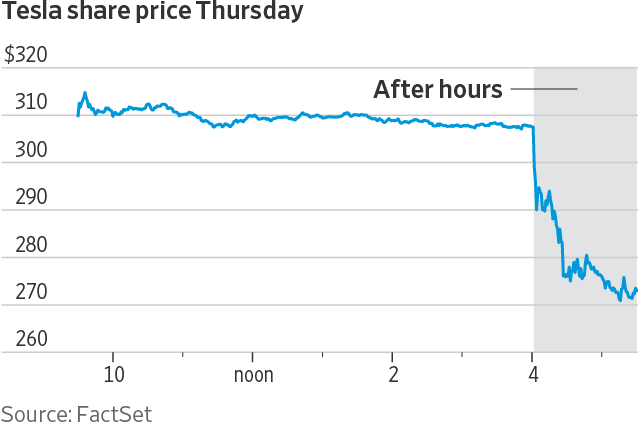 Tesla wasn’t named in the suit as a defendant, but the SEC is seeking to bar Mr. Musk, Tesla’s largest shareholder and its top executive, from serving as an officer or director of any U.S. public company. Tesla shares, which have been under intense pressure amid questions about the firm’s financial strength and Mr. Musk’s behavior, tumbled 9.9% to $277 in after-hours trading Thursday on Nasdaq.

“This unjustified action by the SEC leaves me deeply saddened and disappointed,” Mr. Musk said in a statement. “I have always taken action in the best interests of truth, transparency and investors. Integrity is the most important value in my life and the facts will show I never compromised this in any way.”

The SEC had crafted a settlement with Mr. Musk—approved by the agency’s commissioners—that it was preparing to file Thursday morning when Mr. Musk’s lawyers called to tell the SEC lawyers in San Francisco that they were no longer interested in proceeding with the agreement, according to people familiar with the matter. After the phone call, the SEC rushed to pull together the complaint that it subsequently filed, the people said.

The case ranks as one of the highest-profile civil securities-fraud cases in years. Its filing less than two months after the Aug. 7 tweets by Mr. Musk also marks an unusually rapid turnaround by an agency that has been under fire for its perceived failure to promptly bring significant cases in the financial crisis and other episodes. “It means there was not that much investigation they needed to do to get comfortable that it was a case they should bring, but also a case they can win,” said Michael Liftik, a former SEC enforcement lawyer now at Quinn, Emanuel, Urquhart & Sullivan LLP.

The SEC said that contrary to the statements he made in several Twitter messages on Aug. 7, Mr. Musk “knew that he had never discussed a going-private transaction at $420 per share with any potential funding source.” The agency said the statements and omissions of fact caused disruption to the market for Tesla shares—which rose more than 10% the day of the tweets—and harm to investors.

“It’s an easy case,” said Charles Elson, director of the John L. Weinberg Center for Corporate Governance at the University of Delaware. “He said in the tweet he had financing, and apparently he didn’t. … It’s about as straightforward as you can get.”

The claims against Mr. Musk cap a year of turmoil for the auto maker, whose market value rivals that of much-larger General Motors Co. despite the fact that Tesla hasn’t turned an annual profit. 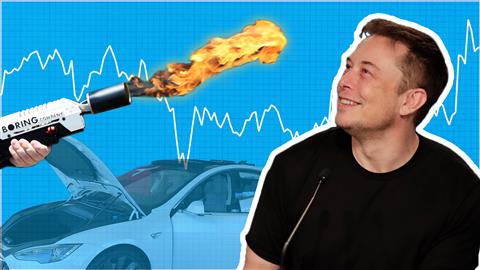 As Tesla has struggled since starting production of its mass-market Model 3 sedan in July of last year, its limited cash supply has taken a hit, placing the company under increased scrutiny about whether Mr. Musk would need to raise additional funds.

He has said Tesla won’t need to do so and has promised that he can keep the rate of Model 3 production at a pace that will help the company become cash-flow positive this quarter and profitable.

Despite his assurance, many analysts say Tesla will need to raise more money, in part because the company has debt coming due next year and because much of the growth projected by the auto maker would require large investments.

A Tesla without Mr. Musk could have a tougher time raising funds, according to David Whiston, an analyst for Morningstar Research Services. “Without Musk, Tesla is just an auto maker burning too much cash and holding too much debt,” Mr. Whiston said.

Amid those pressures, Mr. Musk has fought a war against short sellers, investors betting on Tesla’s failure.

Mr. Musk jolted shareholders Aug. 7 when he tweeted that he planned to take the company private in a deal that would have been worth $72 billion.

The SEC alleged in its lawsuit that Mr. Musk first informed Tesla’s board of directors, chief financial officer and general counsel on Aug. 2 that he wanted to take the company private at $420 a share.

But Mr. Musk’s discussion with the sovereign-wealth fund didn’t include any financial details about such a transaction, the SEC alleged. The parties didn’t, for instance, discuss how much of a premium over Tesla’s current trading price would be offered to shareholders. The lawsuit says Mr. Musk chose $420 by estimating he would need to offer a 20% premium—which would amount to $419—and then rounding up by $1.

The SEC said in its complaint that “Musk stated that he rounded up the price to $420 because he had recently learned about the number’s significance in marijuana culture and thought his girlfriend ‘would find it funny, which admittedly is not a great reason to pick a price,’” the SEC’s complaint says. The number “420” is sometimes associated with marijuana.

Seventeen days after the tweets, Mr. Musk announced he decided against the idea.

Tesla’s 5.3% notes due 2025 were trading late Thursday at around 85 cents on the dollar, down from 87.129 cents just before the news, according to MarketAxess. The bonds had recently rebounded from the low of 81.75 cents reached on Sept. 7.

Adding to concern about the suit is Mr. Musk’s reputation for being a difficult leader. Tesla has seen an exodus of executives over the past two years, including its top sales officer and engineering chief, leaving a clear line of succession unclear. The company’s board has faced scrutiny for its oversight of Tesla’s top executive.

Mr. Musk may be the most prominent company executive the SEC has moved against since Angelo Mozilo, the former CEO of Countrywide Financial, who paid $67.5 million in 2010 to settle allegations that he misled investors about Countrywide’s subprime mortgages. Mr. Mozilo didn’t admit or deny the SEC’s charges.

The SEC has faced public criticism recently for a seeming slowdown in its enforcement activity. Total fines ordered through SEC enforcement activity fell 7.2% in fiscal 2017 to their lowest level since 2013, according to agency figures. Numbers aren’t yet available for the current fiscal year, which ends Sept. 30, but Stephanie Avakian, the SEC’s co-director of enforcement, suggested in a speech last week that they might fall again, partly because of Supreme Court decisions curbing the SEC’s ability to recoup funds for investors.

But she said “numbers do not tell the story,” and maintained it has been “a strong year” for the commission’s enforcement efforts.