More than 1.2m Snapchat users signed a petition urging the company to reverse its “annoying” redesign – but it was a single tweet from Kylie Jenner that may have caused real damage.

After the celebrity tweeted “sooo does anyone else not open Snapchat anymore? Or is it just me” to her 24m followers, shares of the app’s parent company Snap plummeted 6% – a $1.3bn drop in market value that launched a fresh cycle of embarrassing headlines.

But some analysts and Snapchatters said this was more than just a one-day PR snafu. Facing backlash from brands and influencers and ongoing competition from Facebook and newer apps like Musical.ly, another platform hugely popularamong children, Snapchat is suffering from a larger existential crisis, and it’s unclear how it will recover.

“We’re watching a company explode into bits,” said Eric Schiffer, CEO of private equity firm Patriarch Organization, arguing that the redesign scandal was the “greatest app debacle” he had ever seen in Silicon Valley: “This is a kiss of death to a brand like Snapchat with their base that has stuck with them.” 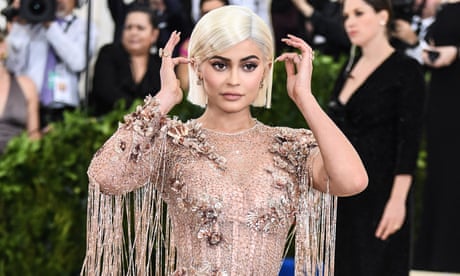 The redesign, launched earlier this month, featured substantial interface changes, including distinguishing content between friends and publishers and reorganizing Snapchat Stories, which are videos and photos that disappear after 24 hours. While major changes to social media platforms often spark brief waves of criticism, the Snapchat controversy could have longer-term impacts, and is just the latest in a series of struggles.

“The whole thing is an absolute mess,” said Scott Levy, CEO of social media agency Fuel Online, noting that his firm generally advises clients not to spend resources on Snapchat. “People are not using it anymore. On top of that, you’re getting public celebrity backlash.”

Snap has recently suffered steep losses as Instagram, owned by Facebook, has attracted hundreds of millions of users to its Stories feature, which functions like Snapchat.

“A lot of my friends were saying they were going to delete it,” said Claire Pachter, an 18-year-old California high school student who has been using Snapchat for about six years and hated the redesign. “It’s so ugly and it’s really hard to understand.”

People are not using it anymore. On top of that, you’re getting public celebrity backlash

Despite the viral criticisms, Snapchat said this week the new design was here to stay.

That’s a risky strategy that could cause serious problems if more users leave Snapchat and the stock suffers further, said Michael Pachter, a Wedbush Securities analyst and Claire’s father: “They clearly didn’t do their homework in testing with users and anticipating reaction.”

Pressure increased Thursday when makeup brand Maybelline asked its followers if it should quit Snapchat given that its “views have dropped dramatically”.

A Snapchat spokesman said the goal of the redesign was to make the app “more personal for everyone”, adding in an email, “This new foundation is just the beginning and we will always be grateful for any feedback from our community as we roll out new products.”

While Instagram has continued to dominate, other lesser-known apps have also grown in popularity, posing further threats to Snapchat.

Musical.ly is a lip-synching app that launched as a gimmick and has grown into a massive video-sharing platform that has attracted millions of teens, turning some of them into stars. It combines features of Instagram, Snapchat and Vine and has expanded at the same time Snapchat’s growth slowed following the launch of Instagram Stories.

Although Musical.ly has a different and younger audience than Snapchat, the music video app is heading in a positive direction, said Schiffer: “It’s only going upwards.” Snapchat, he said, is heading toward “irrelevancy”.

Bilal Khan, a Pakistani singer and actor, said he used Snapchat to connect with fans and has seen a drop in views since the redesign. He has no plans, however, to leave the app: “I guess I just have to accept it and work with it.”

Not all Snapchatters are complaining. Cyrene Quiamco, a popular Snapchat influencer who goes by CyreneQ, said she thought people were overreacting and argued that Snapchat has built a unique community that other apps can’t replace.

“It just takes time to get used to … I’m not too worried,” said Quiamco, 28, who visited Snap headquarters in Los Angeles this week. Snapchat and its audience would persist, she said: “I don’t think it’s going away anytime soon.”