Keith Wright, instructor of accounting and information services at the Villanova School of Business
CNBC.com 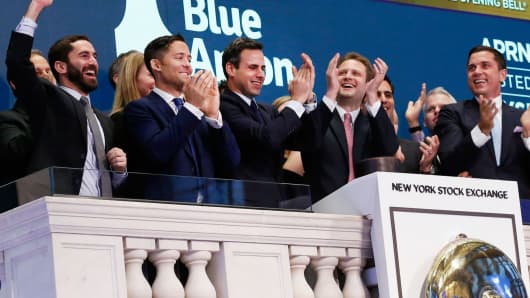 In case you missed it, the peak in the tech unicorn bubble already has been reached. And it's going to be all downhill from here. Massive losses are coming in venture capital-funded start-ups that are, in some cases, as much as 50 percent overvalued.

The age of the unicorn likely peaked a few years ago. In 2014 there were 42 new unicorns in the United States; in 2015 there were 43. The unicorn market hasn't reached that number again. In 2017, 33 new U.S. companies achieved unicorn status from a total of 53 globally. This year there have been 11 new unicorns, according to PitchBook data as of May 15, but these numbers tend to move around, and I believe the 279 unicorns recorded globally in late February by TechCrunch was the peak, where the start-up bubble was stretched to its limit.

A recent study by the National Bureau of Economic Research concludes that, on average, unicorns are roughly 50 percent overvalued. The research, conducted by Will Gornall at the University of British Columbia and Ilya Strebulaev of Stanford, examined 135 unicorns. Of those 135, the researchers estimate that nearly half, or 65, should be more fairly valued at less than $1 billion.

Get big fast. No IPO required

In 1999 the average life of a tech company before it went public was four years. Today it is 11 years. The new dynamic is the increased amount of private capital available to unicorns. Investors new to the VC game, including hedge funds and mutual funds, came in when the Jobs Act started to get rid of investor protections in 2012, because there were fewer IPOs occurring.

These investors focus on growing the unicorn customer base, not turning a profit. New regulatory conditions, including wildly separate share classes, which give some shareholders significantly more rights than others, have resulted in a danger of widespread overvaluation. Some shareholders have voting, rights to assets, rights to dividends, rights to inspect records. Snap won't give any shareholders voting rights, and the shares have steadily declined since the IPO. 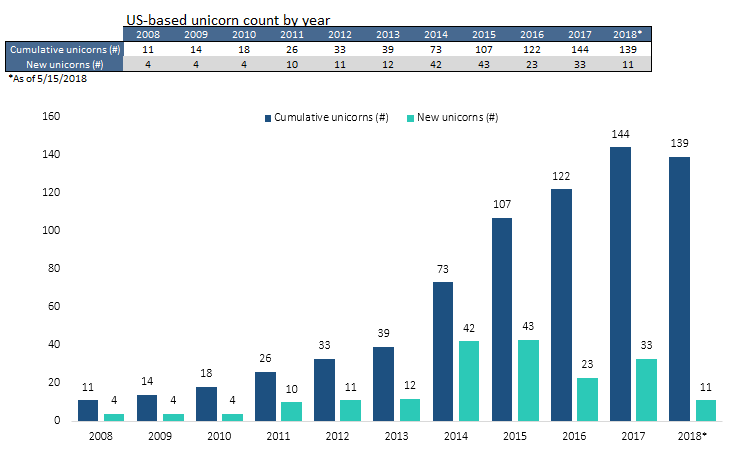 A recalculation model constructed jointly for the University of St. Gallen and Villanova University estimated the average venture capital-backed unicorn reported a valuation 49 percent above its fair value. Researchers believe this is happening because current valuations assume that a unicorn's total shares have the same price as the most recently issued shares. This oversimplification significantly inflates valuations, since the most recently issued shares almost always include perks not found in previously issued shares.

New regulation, beginning with the Jobs Act, allows unicorns to have far more shareholders before they disclose their financials publicly. Multiple funding rounds allow them to get big fast without going through an IPO. They can just go back to their investors for more capital.

More from Disruptor 50: Spotify's IPO disrupted Wall Street. What lies ahead now for unicorns looking to go public Oscar Health has a vision of fairer pay for doctors and clearer pricing for patients Meet the 2018 CNBC Disruptor 50 companies

Seventy-six percent of the companies that went public last year were unprofitable on a per-share basis in the year leading up to their initial offerings, according to data compiled by Jay Ritter, a professor at the University of Florida's Warrington College of Business, and recently featured in The New York Times. This is the largest number since the peak of the dot-com boom in 2000, when 81 percent of newly public companies were unprofitable.

The current volatility and correction evolving in the private market will be amplified for companies that have yet to make money and are burning cash faster than they're bringing it in. Growth at all costs will not weather an economic storm.

Since the Snap IPO in March 2017 at $17 a share, when its shares surged 44 percent during its first day of trading, they have now declined to $11. Dropbox also went public. It had a first-day pop of 36 percent; however, with only 200,000 paying customers compared to its 500 million users, I would be hesitant to rush in to buy, even as it comes off that year-to-date high considerably. Another highly valued start-up, Blue Apron, went public at $10 a share in June and is now trading at $3. Remember Fitbit was a $45 stock in 2015 — it's currently trading at just over $5.

Not all unicorns-to-IPOs have been, or will be, failures. Enterprise software company Atlassian could be a positive example of a unicorn, considering the fact the failure rate for all U.S. companies after five years is more than 50 percent. But when Atlassian paid $425 million to acquire Trello a little more than a year after its IPO, it revealed a factor that will lead to more unicorn failures. Trello beat Atlassian at their own game, with superior software functionality, so Atlassian had to purchase them before it was too late. It was a $425 million pivot, tucked into an acquisition. How many times can they perform that stunt before they are five years old? It only gets harder, as the failure rate after 10 years is over 70 percent.

It's not just the unicorns that have been vastly overvalued. Cosmetics subscription start-up Birchbox was valued at roughly a half-billion dollars by venture investors a few years ago — it just sold for scraps, and the only one willing to buy it was one of its former investors, for $15 million.

Unicorns can no longer meander along burning through private money, and if they do rush an IPO after dragging their feet for an average of 11 years, the outlook could be bleak.

"Billion-dollar start-up valuations are not an indicator of safety. They represent a huge danger of widespread overvaluation."

Large incumbent companies are learning how to adopt emerging and disruptive technologies faster than ever. Companies such as Actesy.comfrom St. Gallen have recently perfected and piloted new software that enables Fortune 500 companies such as Porsche, Roche and BASF to quickly and easily adopt emerging technologies while maintaining their existing highly expensive, entrenched legacy solutions.

Previously, it may have taken 10 or more years to replace enterprise-wide global systems. When large companies learn to sustain their competitive advantage through disruptive technologies, the unicorn game is limited.

Billion-dollar start-up valuations are not an indicator of safety. They represent a huge danger of widespread overvaluation. Companies burning more than what they raised will not be able to return to the well for more. The "get big fast" strategy that many investors and venture capital firms adopted will fail.

When reflecting on a unicorn IPO, ask the right questions.

We have already begun to see that when unicorns launch their IPOs, there is a huge risk of devaluation in the public market, which frequently prices these companies at a lower value than original investors. One recent example: Trivago, a popular German hotel search engine, which saw a huge 29 percent one-week price decline post-IPO, simply because the market dramatically disagreed with its valuation.

Research on start-ups founded between 2012 and 2015 and published in the Harvard Business Review by Vijay Govindarajan and Adam Stepinski anticipated IPO challenges: It found companies were growing in valuation twice as fast as start-ups founded between 2000 and 2013. Dartmouth business school professor Govindarajan said two years have passed since that research, but not much has changed in terms of overvaluation in the private marketplace. 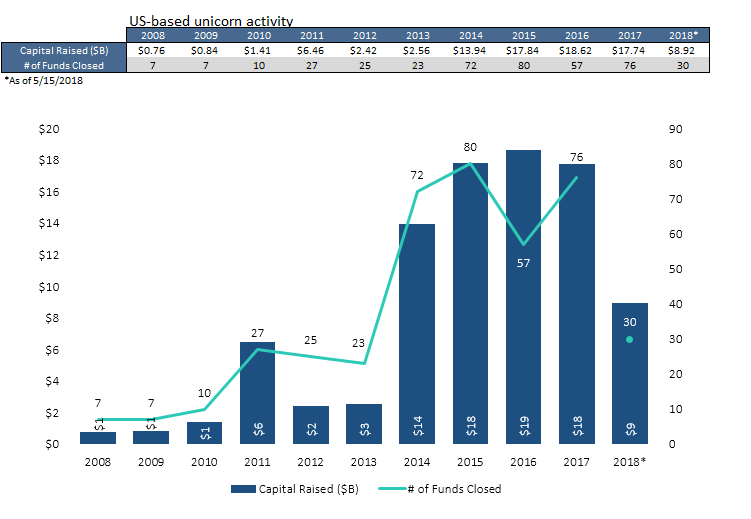 The frenetic era of billion-dollar start-up unicorns is slowing significantly, according to CB Insights. The first red flag was the decline in "megarounds," of $100 million or more, beginning in Q4 2015.

Unicorns are being dramatically impacted in terms of share price by renewed market volatility in 2018. An end to the era of ultra-low interest rates from the Federal Reserve will also weigh on these overvalued names. As interest rates continue to rise throughout 2018, that will accelerate the unicorn slowdown.

Expect to see more dead unicorns. Several high-profile billion-dollar start-ups missed their 2017 year-end revenue targets, including BuzzFeed, Vice Media and Credit Karma, according to the Wall Street Journal. That causes a rift between the start-ups and their results-driven investors of multiple share classes that makes it even harder to raise late-stage capital. The WSJ found that after the second year the returns of unprofitable companies gradually declined even further.

Most unicorn companies aren't producing billions of dollars of revenue. Several financial models project that up to 80 percent of unicorn companies are set to fail within two years. Uber, the highest-valued private technology company, has rapidly growing revenue but remains highly unprofitable. With revenue of $6.5 billion in 2016, it still registered a net loss of $2.8 billion.

The truth is, when a unicorn is overvalued, it doesn't take long for the market to discover this fact. Great odds for a VC batting .300, but not great for your average investor on Main Street and potentially in one or more mutual funds that have invested retirement assets in these companies.

If you intend to invest in a unicorn IPO anytime soon, think twice. And if you haven't taken a close look at your 401(k) or IRA retirement plan investments, check to see what those mutual funds have been dabbling in.

We are now officially in a tech bubble larger than March of 2000. The term unicorn in business parlance was created in 2013 by venture capitalist Aileen Lee. This mythical animal represented the statistical rarity of a start-up company valued at over $1 billion dollars. The term may not last much longer in the financial vernacular than many of the start-ups that were — wrongly — branded with it.

— By Keith Wright, Instructor of accounting and information services at the Villanova School of Business